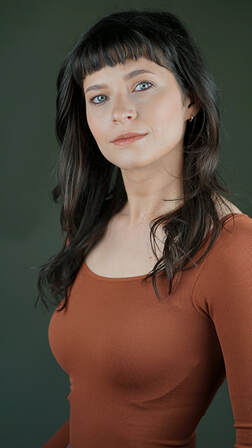 Emily Johnson-Erday (she/her) is a songwriter and actor-musician who hails from the hills of North Carolina. Now based in Brooklyn, she has collaborated on musicals at DGF’s music hall, The Tank, Dixon Place, and the Drama League as a writer and at Teatro Latea, New Victory Theatre Labworks, and the 14th St Y as a performer. Her most recent work was composing the score of Soldiergirls: A WWII Lesbian Musical Comedy, which was commissioned by En Garde Arts and developed with Rattlestick Playwright’s Theater.


Emily holds a BFA from UNC-Greensboro and learned music and songwriting from the Augusta Heritage Center in WV, the Highlander Education Center in TN, her family and the traditional music community of southern Appalachia. She is incredibly proud to join the team of The Debates and play a part in creating a system of support and education for voters.

You can find her music at SoundCloud.com/emilyjohnsonerday and online at @thebanjowitch.


With Theater in Asylum: The Debates 2021