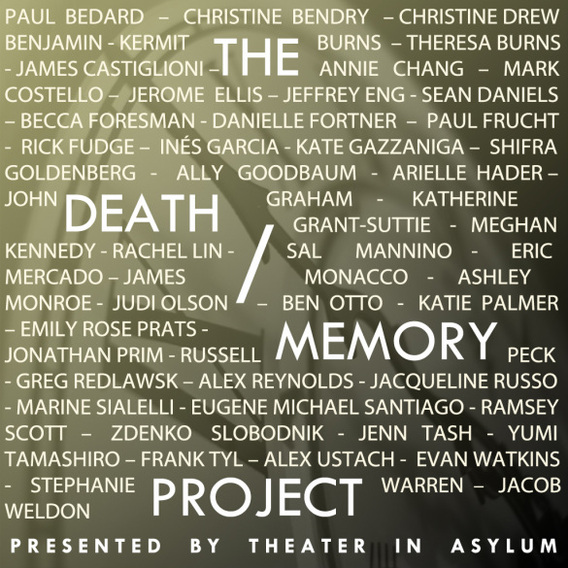 Dirtballs in Her Pocket (Or Dressed to the Nines) by Christine Drew Benjamin
Directed by Ashley Monroe, Starring Emily Daly

Dirtballs in Her Pocket (Or Dressed to the Nines) is dedicated to my American Girl doll, Kirsten. The basis of this play involves the death of someone’s childhood. Not only does it have to do with the fact that we do (unfortunately) grow up/ become adults, etc. but more than anything it has to do with the connections we have with certain things as children and how we learn to leave those things behind us someday. It has occurred to me recently that many people in their late teens to early twenties are suffering from such a dilemma. It is a struggle to move past the idealistic dreams that once filled their childhood fantasies, only to wake up one morning with student loans, Craigslist ads, and health care/cell phone bills piled on their kitchen table (or maybe that’s just me). When does the act of imagining stop? Is it when we pack up all our old toys and move off to college, or is it even earlier than that? Whatever happens to those dreams, those imaginary stories that we once believed so wholeheartedly? These are only some of the serious issues I have been contemplating for quite some time now. Thus came this one woman play. Oh, and please note that this was also inspired from the seriocomedic/classic film Toy Story 3. Thank you.

“What is necessary, after all, is only this: solitude, vast inner solitude. To walk inside yourself and meet no one for hours - that is what you must be able to attain. To be solitary as you were when you were a child, when the grown-ups walked around involved with matters that seemed large and important because they looked so busy and because you didn’t understand a thing about what they were doing.”
- Rainer Maria Rilke

Poetry by Alex Ustach
This collection of poems reflects upon which memories we choose to leave behind, those that we are forced to take with us, and those that we can never regain and that are simply lost in the tug-of-war with time. These poems are about grief, family, love, and the battle we face with the possession of memory versus the taking of death. - Alex

? Corporel, a percussion piece for one body; by Vinko Globokar
Performed by Alex Reynolds
“I recently read this remark: The history of mankind is a long succession of synonyms for the same word. It is a duty to disprove this.” – Vinko Globokar

Nearly Thereafter by Jenn Tash
Directed by Greg Redlawsk
Featuring: Arielle Hader, Ben Otto, Rebecca Foresman, Emily Rose Prats, John Graham
“Lives are of different lengths. That does not mean one is less whole than another at its end.”

Music For Spring, Parts I & II
Composed and performed by Jerome Ellis
“So the world, grounded in a timeless movement by the Soul which suffuses it with intelligence, becomes a living and blessed being.” –Plotinus
For more music by Jerome, contact him at jje2105@gmail.com

“But our love it was stronger by far than the love
Of those who were older than we-
Of many far wiser than we-
And neither the angels in heaven above,
Nor the demons down under the sea,
Can ever dissever my soul from the soul
Of the beautiful Annabel Lee.

For the moon never beams without bringing me dreams
Of the beautiful Annabel Lee;
And the stars never rise but I feel the bright eyes
Of the beautiful Annabel Lee;
And so, all the night-tide, I lie down by the side
Of my darling- my darling- my life and my bride,
In the sepulcher there by the sea,
In her tomb by the sounding sea. “
- Edgar Allan Poe (1849)

The Haunted
Created and Directed by Inés García // Performed by: Rachel Lin, Jonathan Prim, Eugene Michael Santiago, Marine Sialelli
The Haunted is a glimpse at three siblings struggling to bury a dead patriarch in his final resting place.
As the body is dragged, folded, propped, pushed and laid down we see the siblings argue, chastise and mourn together.

Hardy Street
Hardy Street is Kermit Burns, Zdenko Martin, and Sal Mannino
Hardy Street was born in 2005 in Hattiesburg, Mississippi. After a year of fusing styles together, its members followed their individual endeavors, and went in their own direction. In the fall of 2009, Hardy Street reunited in New York City where they are pursuing their individual artistic careers, as well as the expansion of their collaborative musical efforts. www.hardystreetmusic.com

Special thanks to New York Theatre Workshop, Playwrights Horizons Theater School, Sharlene Bedard, Juliet Barbara, Dave & Mary Palmer.
We would like to give a big special thanks to Playgarden, Amanda Vierheller and Valeska von Schirmeister for their continuing support in our work.