At the beginning of the 20th century, Spain and the western world underwent a cultural and artistic revolution.  In industry, car, plane, and radio use were flourishing;, in fashion, women began wearing drastically more revealing clothes;,  birth control was in higher use; and sex was becoming more acceptable to speak of in public.  World War I (1914-1918) created an abhorrence for the old order among many individuals and The Spanish Civil War (1936-1939), a conflict that resulted in the defeat of the Spanish Republic and replacement by Francisco Franco’s fascist dictatorship, pitted countrymen against each other and resulted in the death of hundreds of thousands of Spaniards. In the arts, silent film and movements such as expressionism, cubism, futurism, and surrealism were challenging old standards of the definition of art.  Amidst this period of discovery and upheaval, two great artists met and, we believe, fell in love. 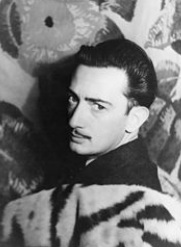 Salvador Dalí was born on May 11, 1904 in Figueres, Spain. He began painting at a very young age and had his first public exhibition in 1919. He enrolled at the Academia de San Fernando in Madrid in 1922, where he met Federico Garcia Lorca for the first time, but was eventually expelled after refusing to take his final exams. He began his first surrealist paintings in 1929 and became a major figure in the movement with his “paranoiac-critical method,” which allowed the artist to access the subconscious in order to enhance creativity. That same year, he met Gala, his future wife, muse, and business partner. Gala handled all legal matters in his career for the remainder of his life. Though most well known for his paintings, Dalí also produced films, created visual art, wrote books, gave lectures, and became famous world wide because of his eccentric lifestyle. From 1960 to 1974, he designed and created the Dalí Teatro Museo (Dalí Theatre and Museum) in Figueres to house his work. He was buried there after his death on January 23, 1989. 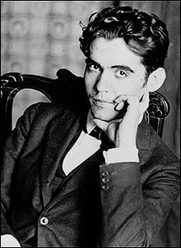 Federico Garcia Lorca was born on June 5, 1898 in Fuente Voqueros, Spain. He published his first book about his travels through Spain in 1919 while studying law in Granada. That same year he moved to Madrid to focus on his writing and became part of the Generation of ’27 along with Salvador Dali. In the 1920s, he received critical acclaim for his numerous volumes of poetry, including The Gypsy Ballads (1928), a collection of Spanish folk poems and ballads. In 1929, he traveled to New York and Cuba for a year during which he wrote his collection A Poet in New York (1940). In 1931, he was appointed as the director of La Barraca, a mostly student theater company that toured Spain giving free performances of classic Spanish drama as well as Lorca’s own work. It was also at this time he wrote his three most famous plays, Blood Wedding (1932), Yerma (1934), and The House of Bernarda Alba (1936). He remained in Spain after the outbreak of the Spanish Civil War and was assassinated by Francisco Franco’s nationalist soldiers on August 19, 1936.
While Dalí vehemently denied that there was any romantic relationship between the two artists, it is clear that they both had a lot of admiration for each other and a very strong friendship.  ¡Olé! is based on a series of letters and mementos that Dalí and Lorca exchanged, which can be found in the book Sebastian’s Arrows, translated by Christopher Mauer.  Much of the text for ¡Olé! can be found in this book and in other primary sources (see bibliography for more information).  The rest of the script has been fabricated, including all but one of Lorca’s letters to Dali (which have yet to be found), and interactions that could have taken place between the two artists.  The source material speaks for itself, and we invite you to consider the possibility of a great romance between two young men questioning art and each other.