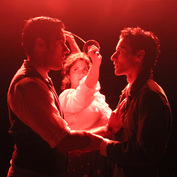 ¡Olé!, 2014
Theater in Asylum (TIA) is a New York-based theater company founded in 2010 to challenge and empower our community. TIA joyfully pursues rigorous research and an ensemble-driven approach to theater-making. We create performances to investigate our past, interpret our present, and imagine our future. We prize space to process, space to question—asylum—for ourselves and our community. 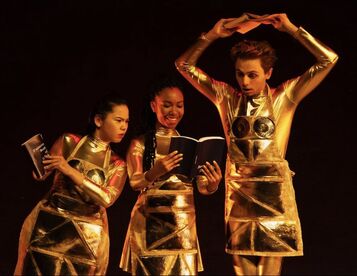 Hephaestus. 2020. Photo by Ryan Prado, LaGuardia Performing Arts Center/Rough Draft Festival.
With all of our work we seek to challenge and empower. We believe that to challenge ideas in a space that welcomes reflection and rigor offers an opportunity to change one’s mind or to recommit to those ideas with newfound clarity. This clarity empowers us to put our ideas into action with confidence. We prioritize and celebrate this process.

Our core programs include productions, cabarets, and Cold Readings.

Our productions have taken on a variety of subject. We looked to the lives of artists including Vaslav Nijinsky (Nijinsky in Asylum), Mary Shelley and Ray Kurzweil (Frankenstein), Federico García Lorca and Salvador Dalí (¡Olé!), and the Brontë sisters (The Brontës). We have looked to complex society processes like revolution (Revolution in 1) and gentrification (Totally Wholesome Foods). 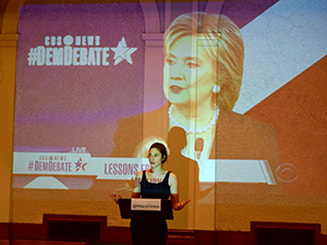 TIA cabarets delve into our productions’ themes more deeply. We invite artists in our community to create short performances interpreting a theme that unifies the night. We program the evening to emphasize contradictions among interpretations and have multiple intermissions where audience members and artists can discuss the work over food and drinks. Previous cabarets have looked at how death becomes memory (The Death / Memory Project), how the locations of our battles define them (The Battlegrounds Project), and how the national imagination is guided in the early parts of presidential campaign season (The Countdown Cabaret).

A Cold Reading, 2020
Our third core program is Cold Readings, where we invite our community to join us in reading and discussing plays. Similar to a book club, we read plays without the pressure of performance and cherish the opportunity to learn about our artform. The series has vastly grown since beginning in 2015, with frequent guest facilitators and new readers joining all the time.