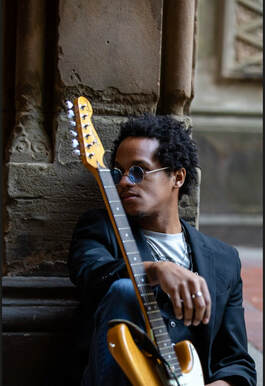 Like many, Kavion Sabio first discovered his love of music within the four walls of his church. Motown flowing through his home influenced his lyricism, while rock inspired him to pick up guitar. He began playing in his early teens but pursuing it didn't come until he settled into college. the sounds of Jimi Hendrix & John Mayer were filling his headphones. Everything from Hendrix's overall approach to playing & lyrics intertwined with Mayer's ability to go in & out of various genres kept kavion's approach to music versatile

An old, mellow soul Kavion Sabio brings a soothing sound to the modern era which his music seamlessly conveys. It's for those aiming to ease the stress this crazy world is constantly throwing out on a daily basis. When the headlines become too much, Kavion Sabio's music is there to act as an audible comfort blanket. From the emotional subtlety of "Tears Of The Moon" to his first time experimenting with GarageBand bass and drum loops in "Memories," each and every track he puts his creative hands-on creates content resonance. Now he’s ready to add his vocals to the mix.
​
Kavion Sabio does not plan on stopping until all his goals are met. Right now he is focused on completing his EP "Work In Progress". Paired with his drive to bring soul back, it's only a matter of time before he is heard in media outlets around the world.
​
With Theater in Asylum: Totally Wholesome Foods